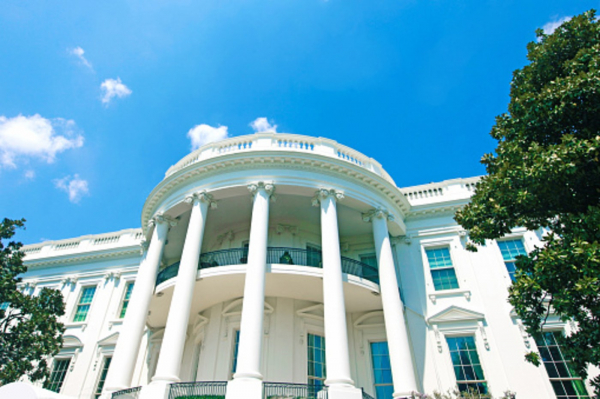 Volatility could be higher this week with news flow, low trading volumes

U.S.-China trade talks set for this past weekend were canceled

(Monday Market Open) It’s looking like investors might still be searching for a catalyst to move the market one way or the other.

A holding pattern seems to have developed with the S&P 500 Index (SPX) near its all-time closing high set in February but unable to clear that level recently. Investors likely will be closely watching that high water mark today.

Federal Reserve stimulus and a largely better-than-forecast earnings season have helped push the SPX to the near-record level, but continued worry about the fledgling economic recovery has helped keep the index from closing in new territory. Investors hoping for a fresh stimulus package from Congress have been disappointed as talks in Washington have stalled, robbing the market of what could be a fresh impetus to push meaningfully higher.

At the same time, there hasn’t been too much selling pressure as economic data, while far from pre-pandemic levels, has generally been showing progress in a green-shoots economic recovery that appears to be getting more roots under it.

And earnings season has generally been better than expected, with most of the SPX companies that have opened their books doing better than expected. JD.com (JD), a Chinese e-commerce company, joined that club this morning, beating forecasts for both earnings and revenue.

This is a big week for earnings reports from retailers—including Home Depot (HD), Lowe’s (LOW), Kohl’s (KSS), Target( TGT), and Walmart (WMT)—which could provide some additional clarity on the state of the U.S. consumer.

Additionally, NVIDIA’s (NVDA) report might show how the work-, play-, and learn-at-home trend is progressing.

In addition to retailer earnings reports, market participants also will have plenty of other news to stay tuned to during what is typically a slow summer trading week. U.S.-China trade talks that had been scheduled for this past weekend were canceled, leaving investors possibly wondering about the trade front. Domestically, investors will likely be watching for developments from the Democratic National Convention as well as any news about the U.S. Postal Service situation. And there’s still the stimulus stalemate situation.

Friday saw another day of lackluster trading, with all three of the main U.S. indices experiencing light volume. The S&P 500 Index (SPX) edged further from the record high close set in February, although it remained within spitting distance of that mark.

As we pointed out last week, the fast stochastic indicator was indicating SPX may be overbought when it came so close to its all-time high. The oscillator is still indicating SPX is overbought, although it seems to be oscillating in and out of overbought territory. It’ll be interesting to see how this pans out as SPX continues its flirtation with new all-time highs.

All in all, it might not be that bad of a time for market participants to take a vacation, which it appears many may have been doing—it is mid-August after all. Volume for the SPX on Friday was about a third of its average.

Keep in mind that low volumes can exacerbate volatility, especially during a week like this when there’s also lots of potential for ups and downs based on the news flow.

Michigan Sentiment and the State of the Consumer

Meanwhile, a new report on the state of the consumer came in higher than expected on Friday, with the preliminary University of Michigan consumer sentiment index printing 72.8 for August. Although that was stronger than the 70.5 expected in a Briefing.com consensus, it was about on par with the 72.5 for the July reading.

For reference, the index topped out at 101.0 in February 2020, just as the coronavirus pandemic began to impact the U.S. economy.

University of Michigan Surveys of Consumers chief economistRichard Curtin said in a statement accompanying the numbers that policy gridlock in Washington was responsible for consumers becoming more pessimistic about the five-year economic outlook since April.

The gridlock has increased uncertainty and “heightened the need for precautionary funds to offset lapses in economic relief programs and to hedge against fears about the persistence and spread of the coronavirus as the school year gets underway,” he said.

While it’s good to see sentiment moving higher, even in a small way, it seems possible that the longer Congress remains at an impasse the more U.S. consumers will fret about their economic situation, possibly adversely affecting the consumer spending that so many businesses rely on.

According to the Bureau of Economic Analysis, consumer spending accounts for about 70% of the economy. Services make up about 78% of gross domestic product (GDP), and as we all know, services—particularly small businesses—have borne much of the economic brunt from the lockdowns, so it’s no stretch to see consumption trends as a key to recovery. 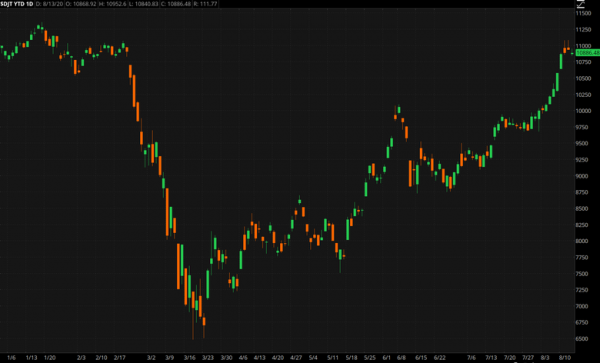 CHART OF THE DAY: YIELD CHECK. Longer-dated Treasury yields have been rising as the government has sold a lot of debt, making stocks marginally less attractive compared with, say, the 10-year note. Still, that yield – represented here by the 10-year Treasury Note Yield Index (TNX)– are quite low historically, meaning investors will probably continue looking to equities for yield. For example, as of Friday, the dividend yield on the S&P 500 was 1.77%.Data source: Cboe Global Markets. Chart source: The thinkorswim® platform from TD Ameritrade. For illustrative purposes only. Past performance does not guarantee future results.

Unwrapping Retail Sales: Even though retail sales data for July came in shy of expectations on Friday, there was some good news tucked into the report. Sales excluding autos came in at 1.9% compared with the 1.4% expected in a Briefing.com consensus. In the latest numbers, sales of automobiles and parts for them actually fell 1.2% compared with a gain of 9.1% in June and a surge of 48.3% in May. Some of the decline in auto sales may have to do with people already having used the $1,200 stimulus checks to help fund auto purchases. Or, they may have felt the impending financial pinch as $600 in extra unemployment benefits were scheduled to roll off at the end of July. Regardless of why auto sales dropped, it’s encouraging that even with that decline the total figure still managed to rise at a 1.2% clip in July, a rate that wasn’t too far off from the 1.8% rise expected in a Briefing.com consensus.

Retail Sales Revision: There was another bright spot in the retail sales data in addition to the better-than-forecast ex-auto number. The figure for June got upwardly revised to 8.4% from 7.5%. That’s a pretty decent hike of almost one percentage point for a reading that heavily influences overall gross domestic product. On Friday, a new Atlanta Fed GDPNow estimate for third quarter real GDP growth rose to 26.2% from 20.5% a week earlier. We’ll have to wait until late October for the government’s first official estimate of third quarter GDP, which is one reason that the monthly retail sales reports are so closely watched, as they provide a more timely barometer of economic health. This month, retailers such as Walmart (WMT) and Target (TGT) report quarterly results, potentially giving added clarity to investors about the retail landscape.