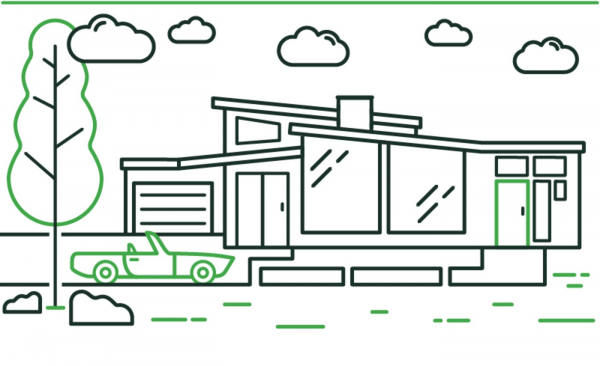 6 Powerful Habits of the Wealthy

Get in the habit of setting aside money regularly to save

Set clear, long-term personal and financial goals, which can help you accomplish more

Financial success, and what it means to be wealthy, is largely in the eye of the beholder. But many of us would like to learn the habits of the wealthy to help us reach and maintain our wealth potential, whatever that might look like for our individual circumstances.

Different people take different paths to becoming rich, and it’s not just about securing a desk in the C-suite, striking it rich in Silicon Valley, or snagging that lucky lottery ticket.

In fact, many of the to-dos on the path to wealth have little to do with earnings. Wealthy people tend to practice daily habits that are designed to protect and grow their investments and help keep body and mind in balance, according to experts in the financial world.

First, some parameters: What exactly does “wealthy” mean?

Wealth is “definitely a relative term,” said Robert Siuty, senior financial consultant at TD Ameritrade. But the old millionaire tag is still synonymous with wealth, Siuty said, so it’s a good benchmark. More precisely, a wealthy “millionaire” might have $1 million or more in ready cash and other liquid assets (as opposed to illiquid assets).

Don’t Obsess About Your Salary, or Where You Came From

You don’t have to be a high-income one-percenter to be wealthy. In his experience, some of Siuty’s clients never made more than $60,000 to $70,000 per year, “but did a very good job of managing overall expenses.”

“They may be sitting on several million dollars, simply because they started planning early on, they saved as aggressively as they could afford to, and they invested that money and stayed invested over the long haul. Wealthy people come from all walks of life—they really, truly do,” Siuty said.

Let’s look at a few key habits of the wealthy. 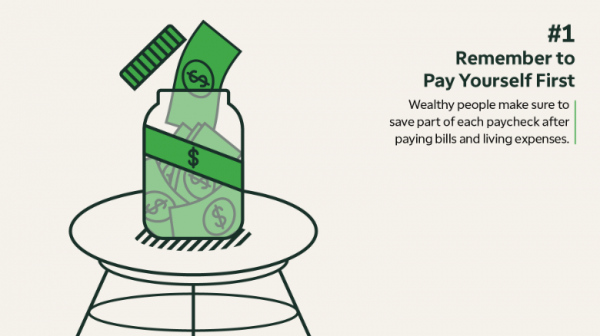 Basically, paying yourself first is about having your financial and budgeting ducks in a row. Wealthy people make sure the usual bills are squared away every month while setting aside enough to build and maintain an emergency fund. “Anything in excess of that reserve, they invest,” Siuty said.

One key to building wealth is creating a budget and sticking to it. Wealthy people know how to hold the line on discretionary spending items that can help them increase the “invest” portion of their monthly budget. 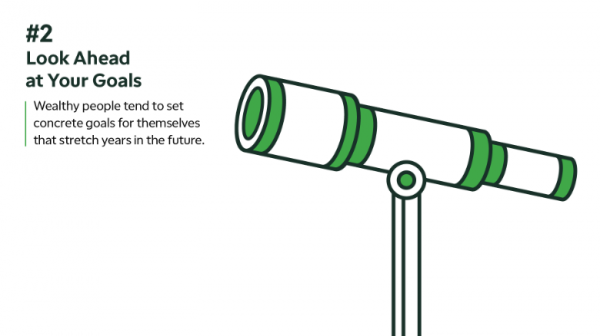 Wealthy people typically set concrete goals, both personal and financial, and have a long-term focus that looks years, if not decades, down the road. The more specific the goals and the longer term the goals are, the better. “Understand that it’s about time—the power of compounding returns, in other words—that may help you to accumulate wealth,” Siuty said.

The wealthy understand that it begins with setting personal goals—what you want to get out of life and how you might prioritize your list. And once you have an idea what you want to accomplish personally, you can plot a financial road map to help steer you there.

In other words, the path to wealth can involve starting early, and focusing on the long term. If your financial goals are clear and you’ve planned well, you don’t necessarily need to follow every market tick. But you should be aware of how your portfolio performed on a quarterly or annual basis and be ready to rebalance assets if necessary. 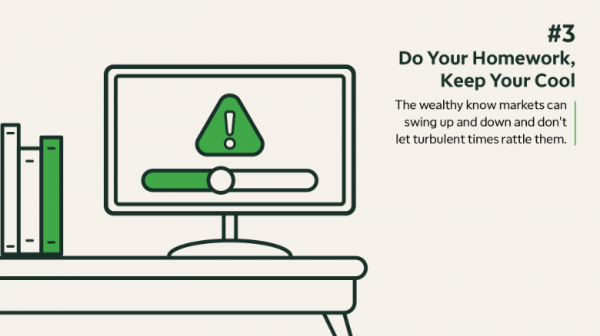 Markets go up, and markets go down—often suddenly and for no apparent reason. Define your comfort level with risk, keep your emotions in check, and recognize what you can and can’t control.

Wealthy people tend to understand the dynamics of the market and avoid making rash decisions, Siuty said. “They don’t let the market rattle them, they actually may turn a bear market into a potential advantage by buying assets cheap.”

According to Siuty, there’s no “secret sauce,” except that, to build wealth, it helps to “stay disciplined, be methodical, and not let emotions get the better of you.” 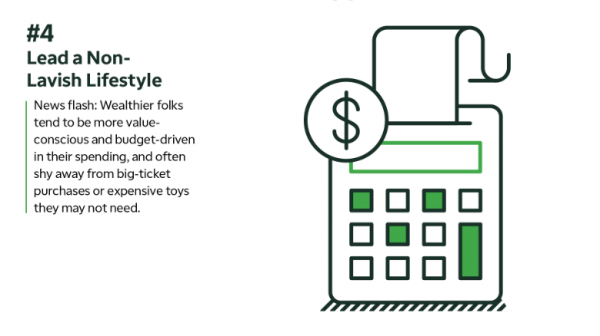 Here’s the scoop: Despite the popular characterization of rich people throwing money wantonly around in movies and TV, in reality, wealthier folks actually tend to look for value in their purchases.

“Instead of buying the $2 million house, they might buy something that’s one-third or one-quarter of that price,” Siuty said. “Less money to heat it, less to cool it, less in property taxes.”

And wealthy people generally understand the difference between price and value. In other words, they’re not afraid to open the pocketbook, but they tend to expect value in return. 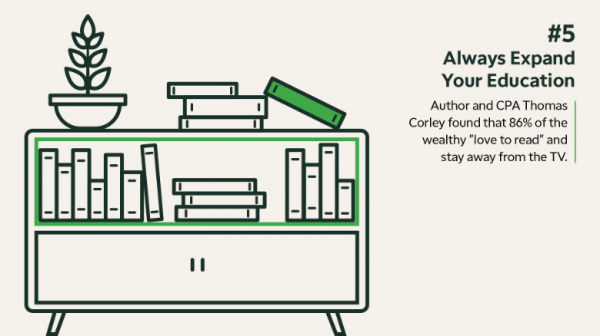 Education is one of the keys to success, and reading is one of the most efficient ways to learn. According to Thomas Corley, author of Rich Habits: The Daily Success Habits of Wealthy Individuals, 67% of the rich watch TV for one hour or less a day. Only 6% of the wealthy watch reality shows, he wrote, while 78% of the poor do.

Corley, a CPA and CFP, found that 86% of the wealthy “love to read,” with most of them reading for self-improvement. 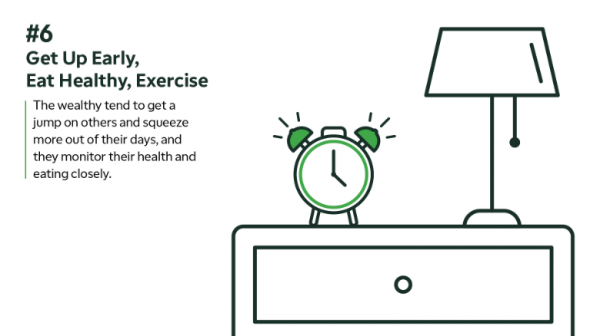 The wisdom that “time is money” goes all the way back to Benjamin Franklin, so it’s no surprise that the wealthy tend to wake early and make the most of their time.

The other aphorism the wealthy take to heart is “health is wealth.” According to Corley, 57% of wealthy people count calories every day, while 70% eat fewer than 300 calories of junk food per day. Some 76% do aerobic exercise at least four days per week. Self-made billionaire Richard Branson, for example, is reported to wake up around 5 a.m. to work out before starting his day.

Of course, these are tendencies, not guarantees. Practicing yoga, reading a book, and setting your alarm for early mornings won’t magically grow your investment account balance. But seeking a life of balance in mind and body, creating measurable goals, and prioritizing saving and investing, can help put you on the right path, and help keep you from straying from that path.

And the earlier you start, the better. 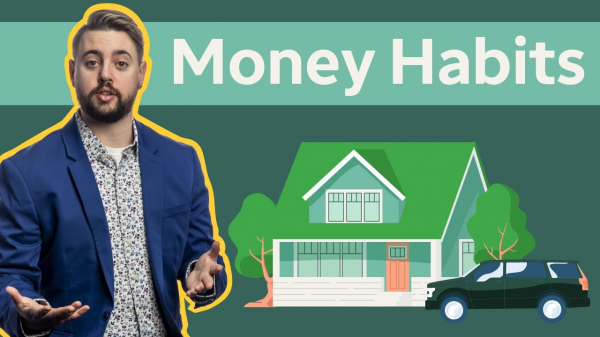 Habits of the Financially Independent
4:00