February Outlook: Stocks Are Seeing the Most Energy in Energy – EA FOREX 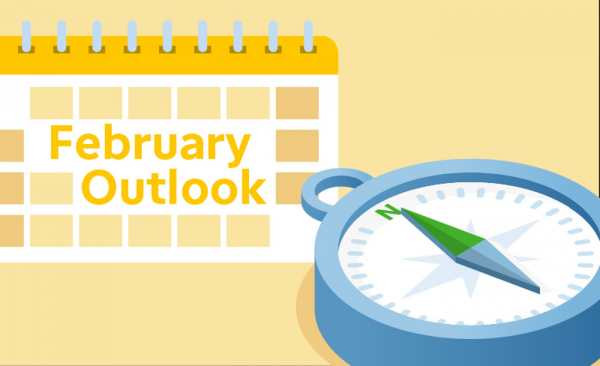 February Outlook: Stocks Are Seeing the Most Energy in Energy

2022 has gotten off to a rocky start for the stock and bond markets because investors are anticipating the Federal Reserve will raise rates higher and maybe even faster than expected. The interest rate environment is leading to changes in how investors value stocks and what sectors they’re buying and selling. While Fed Chairman Jerome Powell laid out plans to raise the overnight rate to 0.90% by the end of the 2022, the market isn’t buying it and is looking for more.

The change in sentiment has investors discounting and revaluing stocks, which is leading many investors to shift allocations from growth to value, from technology to energy, from consumer discretionary to consumer staples, and from pandemic stocks to reopening stocks. However, the shifting and changing is leading to major swings in the market and increased volatility.

Additionally, there are numerous risks that just aren’t going away. COVID-19 lingers with its Omicron variant. Supply chains are still struggling. Inflation continues to grow at rates not seen in 40 years. The financials kicked of the new earnings season with mixed results. And the market is anticipating higher interest rates. So, what does all this mean for February? Let’s breakdown these issues and see how they could shape the markets for the month of February.

The COVID-19 pandemic has stretched on longer than most experts had projected. At the beginning, the hope was two weeks would “end the spread,” but it has now lasted over two years with different mutations and variants of the virus. The Omicron variant has shown to be more contagious but less severe and less lethal; however, many countries still have heavy lockdown restrictions that are hindering supply lines and manufacturing from getting products to consumers and reopening the global economy.

Supply chain problems have been the third most common topic discussed in earnings calls. The Port of Long Beach in California reported having its busiest year with more than nine million cargo containers processed in 2021. Dwell times, the amount of time a ship waits at sea to move into port, has fallen by half from its summer peak. Last summer, it wasn’t uncommon to see more than 80 ships sitting off the coast of the California, but in January, the number is closer to 40 per day. However, part of the success in cutting dwell times has come from ships going to Mexico ports and products being trucked back to the United States. Getting past the holiday season should be helping as consumption has been slowing.

Additionally, an increasing number of countries are rolling back COVID-19-related restrictions. The United Kingdom announced that it would roll most of its restriction toward the end of January. Northern Ireland and Thailand are also reducing restrictions. France is in the middle of its Omicron wave but plans to repeal restrictions early in February. These moves should help get supplies chains back on track.

With that said, finding workers is an on-going problem in the United States. The Great Resignation, which is the phenomenon that many workers are leaving their current jobs to start business or to find jobs that allow greater flexibility like working from home or working fewer hours, has resulted in a record “quits rates”. JOLTS (Job Openings and Labor Turnover Survey) have declined a little, but there are still 10.6 million job openings going unfilled. In fact, labor issues, and in particular rising labor costs, are the most common topic on earnings calls according to FactSet.

Amp up your investing IQ.

Rising labor costs can be a big drag on a company’s earnings and is often a leading indicator to a recession. Wage inflation adds to the current inflation problems, which is normally combated by the Fed raising interest rates. Companies that are able to control costs and keep debt low are more likely to weather the current business environment. This is one reason value stocks have been one of the best-performing market sectors in 2022.

When interest rates rise to a certain level, many investors revalue their investments and alter their price targets. This is because stock valuation tools like the discounted future cash flows model use interest rates to help determine a company’s intrinsic value. Intrinsic value is a measure of what a company or an asset is worth. The model looks at the rate of earnings growth for a company over a certain period and then discounts those earnings into present value. The discount rate is usually the “risk-free” rate of return, which is commonly the 10-year Treasury yield (TNX). The higher the yield rises, the less those future earnings are worth.

But, the 10-year yield isn’t the only factor that can change valuations. Rising business costs from inflation and rising borrowing costs from higher interest rates could also reduce the estimate for future earnings growth or reduce the price multiple that investors are willing to pay for the stock. There are other variables at stake when calculating intrinsic value, but you can see that interest rates are an important one.

Energy stocks could have more room to run because oil prices are trading near a seven-year high, and supply is struggling to keep up with demand. Last year, the United States was pressuring OPEC (Organization of the Petroleum Exporting Countries) to increase its petroleum production, but his plea fell on deaf ears. However, OPEC may not have much more spare capacity. Spare capacity is the amount of oil volume above normal production that could be brought to market in 30 days and sustained for at least 90 days. According to the U.S. Energy Information Administration, OPEC currently has spare capacity of about 4 million barrels per day, but the highest spare capacity in the last 20 years was about 7.5 million barrels per day. This means supply may have to come from somewhere else or prices will likely rise.

Another supply issue is that energy companies are struggling to find funding for exploratory drilling. According to Barron’s, many banks and investors grew tired of funding drilling projects that were losing money and turned to funding green energy projects instead. Green energy projects are more appealing because of the amount of money governments are willing to put into green energy, which reduces the risk to green loans. Bloomberg reported that the change in favorability to green energy occurred in 2016 when banks doubled the amount of green debt issuance. However, green energy has failed to make up the difference between what has been lost from fossil fuel output.

Then there are several political risks related to oil:

Regulatory risk: Last year when President Biden came into office, he used executive orders to limit the amount of drilling that could take place on public lands and offshore. While the Department of Energy continues to provide some drilling permits, it may need to increase the permits or repeal the executive order to get domestic production up 2019 levels.

Embargo risk: The United States is also trying stop Russia’s Nord 2 pipeline going into Germany as a way to battle Russia’s growing influence in the area. While the Germans appear to welcome the flow of oil, other European countries are opposed, which is leading to strife in the area.

Unrest risk: Speaking of strife, Russia has gathered troops near the Ukrainian border, prompting the United States and the United Kingdom to pull some diplomats out of their Ukraine embassies. Additionally, NATO has sent support troops into the region. Looking just south of Russia, Kazakhstan experienced unrest earlier in January over its oil production. Going further south still, the United Arab Emirates experienced an attack on its oil infrastructure that stopped the flow of oil through the Kirkuk-Ceyhan pipeline for some time.

Finally, the Omicron variant continues to hurt spare capacity in various countries, hindering drilling and pumping, halting work on pipelines, slowing the transporting of oil through trucks and trains, and so on. This is all while the largest oil users located in the Northern Hemisphere are traveling less because of their winter season. When the travel season picks up again this spring, higher demand may meet an already cramped supply system.

In early earnings returns for airlines, American Airlines (AAL) and United Airlines (UAL) were able to do better than their estimates, but during their respective earnings calls, both CEOs were bullish on the spring and summer travel seasons because of the potential change in Omicron cases. Falling cases and the ability to live with the virus should allow travelers to get out and about. Furthermore, lower cases should help airlines see fewer workers calling in sick. Infected workers were a leading contributor to flight cancellations over the holiday and winter seasons. A big travel season colliding with rising oil prices could be a new problem for airlines because jet fuel is one of the highest expenses for airlines, which could result in higher ticket prices and fewer bookings.

With that said, the broader transportation sector has been relatively strong. The Dow Jones Transportation Average was down less than 7% YTD, which is less than that S&P 500’s 10% mentioned above. Transports, particularly railroads and trucking companies, are likely to benefit from rising oil prices because of the trouble with getting pipeline approval through the U.S. Congress. This means more oil will have to move via rail and highway.

According to Refinitiv, 76.6% of companies that have reported earnings so far have beat analysts’ estimates, which is actually above the long-term average of 65.9% but below the prior four-quarter average of 83.9%. Energy companies are carrying much of the load as the estimated earnings growth rate for Q4 on the S&P 500 is 23.7% but only 15.6% without energy companies. Materials, another inflationary sector, has the second-highest earnings growth rate with nine out of 10 subsectors projected to be higher than a year ago.

Financials had a bit of a disappointing kickoff to the earnings season despite most companies beating earnings estimates, according to FactSet. Many financials fell after their earnings reports or conference calls. The problem could be twofold: a tougher trading environment and the fact that financials rallied through much of December, which made earnings reports a catalyst for many investors to take profits.

As noted previously, of the S&P 500 companies that have reported earnings, 60% have cited the negative impacts of labor costs on earnings. Other common conference call themes observed by FactSet are COVID-19 costs and impact, supply chain disruptions, transport and freight costs, and raw materials and commodity costs. So far, rising interest rates and the Fed have been mentioned just a few times.

Overall, earnings season has actually been positive, so the rocky stock market returns in 2022 isn’t as much about earnings growth. It appears to be a question of how to value these earnings in an environment where interest rates are rising.