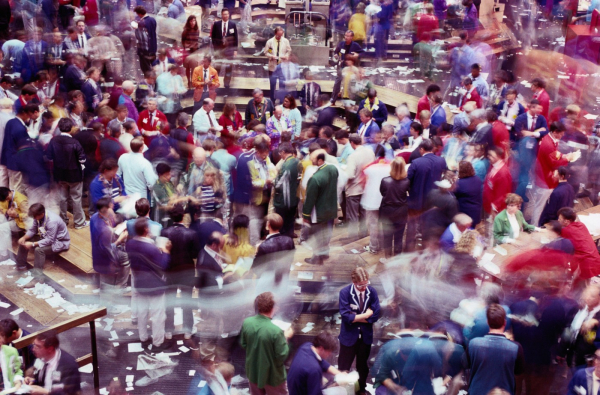 (Wednesday Market Open) You know that old expression about three times being the charm? Tuesday seemed like about the fifth or sixth time the S&P 500 Index (SPX) had crept within range of an all-time closing high in the last week, but finally something clicked.

In settling at 3389—three points above the old all-time high close reached six months ago—the SPX completed its journey back from one of the shortest bear markets in history. All those dramatic losses from February and March? They’re history. Oh yeah, the SPX also set a new all-time intraday high Tuesday, too—just above 3395. The monkey’s off its back.

That doesn’t mean we necessarily go straight uphill from here. Some would argue that there need to be a few closes in a row above the old high before it’s clear that the SPX has truly entered a new phase. Also, in the past when new highs were posted, they often got followed by periods of consolidation that lasted a while. Keep in mind, too, that the SPX technically remains overbought by some measures, trading more than 10% above its 200-day moving average.

With its rebound of more than 50% from the March 23 lows, the market had a lot of assistance from the Fed and Congress. Now some analysts say stocks could go into a holding pattern for a while unless they get another round of Washington assistance. There’s no sign of progress on that front.

Also, one thing the bears are pointing at is that the new highs came on low volume, compared with high volume back in February when the old highs got set. Still, a record is a record, and this is traditionally a slow time of year for volume because we’re in the “dog days” of summer. It is impressive  that the SPX rose slightly in pre-market trading today after hitting the record yesterday. Sometimes sellers pour in after a new high, but so far that doesn’t look like the case.

Today looks a bit like yesterday with people focused on retail earnings. This time it’s Lowe’s (LOW) and Target (TGT) reporting absolutely amazing quarters that just obliterated analysts’ estimates. Like Walmart (WMT), same-store and online sales growth at TGT went kind of nuts in Q2. Investors appear to like what they saw—shares climbed 8% in pre-market trading.

Same-store sales at LOW also skyrocketed, and shares are up about 2.5% in pre-market trading. Looking at TGT and LOW after WMT and Home Depot (HD) yesterday, it was obviously a milestone quarter for retailers as customers flocked back. Back at the start of the quarter, these stores had six to eight weeks of being the only game in town during the shutdown, so people didn’t have much choice where to go.

The message from earnings yesterday and today could be that companies who were beneficiaries of the shutdown really thrived. The question is whether they permanently took away customers from others. The fact that they’re giving positive outlooks means they might feel confident they can keep these new customers, but if they do, some competitors might suffer.

The earnings train keeps rolling this afternoon as chip-maker Nvidia (NVDA) is expected to report. Investors normally keep a close watch on performance of its gaming and data center segments. There’s also data today, with Fed minutes due. It’s hard to believe the minutes can provide much insight in these times when rates are basically dialed in.

A more interesting meeting to monitor today might be OPEC+ (meaning OPEC plus Russia). No major announcements are expected, media reports said, and the focus is likely to be on member compliance with production cuts. The group has been starting to return more crude to the market lately after those deep output declines last spring. Crude is slightly lower today and is stuck in a very tight range in the low-$40’s per barrel.

Tomorrow’s early focus likely turns to weekly initial jobless claims. Consensus is for 990,000, according to research firm Briefing.com, up just a smidgen from 963,000 the prior week. Any jump back over one million might get a fish eye from investors.

Bend in the Trend

Some trends we saw in early August, like rallies in transports and the “reopening” stocks, seem to be leveling off a bit. Small-caps also lost ground Tuesday after spending much of the last month running ahead of the bigger indices. Some of this might reflect investor concern about lack of progress on a new stimulus package.

Cyclical areas like Industrials, Energy, and Materials all arguably have something to prove as the week continues after finishing last on the scorecard Tuesday. These are sectors many analysts think would benefit if more Americans went out shopping, and despite signs of progress, they didn’t bring much firepower early this week.

Some of the factors that people watch to determine how the virus fight is going—like airline boardings tracked by the Transportation Security Administration (TSA) along with restaurant and travel bookings—look better lately. You’d think that data, along with falling case numbers, would help airline, restaurant, and casino stocks, but it didn’t happen Tuesday.

On the other hand, a really nice-looking July housing starts and building permits report Tuesday did lead to gains for some home-builder stocks like KB Homes (KBH) and D.R. Horton (DHI). That said, neither really exploded to the upside, and you might have expected even better days considering how positive the data were. Maybe the lack of traction reflects how far these stocks have already come.

For the most part early this week, investors seemed content to fall back on what’s been working throughout this long rally, snapping up shares of Amazon (AMZN) and the other FAANG stocks, along with Microsoft (MSFT). The path of least resistance seems to keep attracting bids, especially amid talk that the world isn’t likely to go back fully to the way it was (everyone working in offices) even once the pandemic ends. That trend generally would seem to help the shop-at-home, cloudmaking, video game, and social media stocks, which doesn’t say much of anything that’s new.

The chip sector, however, hasn’t made much progress this month and might be in a consolidation period following a long stretch from March through July where the Philadelphia Semiconductor Index (SOX) outperformed the major indices thanks to hopes for better demand from stay-at-homers. 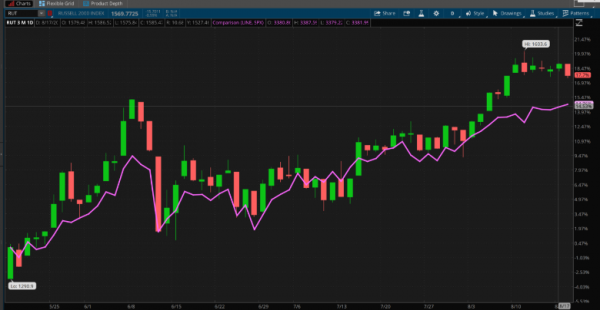 CHART OF THE DAY:  LEAD NARROWS FOR RUT: Not long ago, we noted that the Russell 2000 Index (RUT—candlestick) had been sharply outperforming the S&P 500 Index (SPX—purple line). It still is when you look at the last three months on this chart, but has lost some of its lead over the last week. This lines up with a few other trends from early August—including cyclical and value stock rallies—losing some steam. The question is whether that’s temporary or longer lasting. Data Sources: FTSE Russell, S&P Dow Jones Indices. Chart source: The thinkorswim® platform from TD Ameritrade. For illustrative purposes only. Past performance does not guarantee future results.

Cash on Hand: There still appears to be a hefty amount of cash “on the sidelines,” some analysts said. There’s no saying if and when it might get invested, but you can probably include it in the list of reasons there might be more upside.

Having said that, some of the cash appears to be landing in Asia, judging by the strong performance of Chinese stocks over the last two months. European markets are just slogging along, however, and weak bond yields there don’t seem to pose much threat to the long rally in U.S. Treasuries. U.S. 10-year yields seem to have hit the brakes for now around 0.66%, but that’s still thin air compared with German 10-year yields of negative-0.46%.

The next European Central Bank (ECB) meeting, by the way, is Sept. 10. Normally, now is the time of year when Fed types head to Wyoming for their summer economic symposium, but that’s not happening. Instead, there’s a two-day online meeting late next week. Somehow, it just doesn’t feel the same. As we said, there’s nothing normal about this year.

Brick-and-Mortar Loses Ground: A bit lost in the shadow of great earnings from Walmart (WMT) and Home Depot (HD) was Kohl’s (KSS), which saw its shares plummet more than 14% yesterday. Even before Tuesday’s unpleasant earnings news, KSS shares had been trading at their lowest level since 1998, according to Barron’s, as many investors lost faith in the department store industry. To rub salt in the wound, KSS isn’t even able to enjoy the typical tailwind it gets from back-to-school sales, as kids aren’t snapping up new clothes like they would normally this time of year.

In its conference call, KSS executives didn’t sound optimistic about the coming holiday season, and that might give investors pause as they snap up shares of WMT, Amazon (AMZN), and other companies that tend to get a nice lift most years from holiday sales. Sure, you could argue that WMT and AMZN are generally better situated to handle an unprecedented holiday environment where many people don’t show up at stores. However, there’s also worry that maybe some sales got pulled forward into Q2 and might not be there to help these retailers in Q3 and Q4. That’s especially possible if Congress can’t get a new stimulus plan passed.

Experts’ Opinions: If you like the old expression, “Follow the money,” maybe you noticed a Bloomberg report yesterday on how professional money managers are embracing the rally after cutting their equity exposure when the crisis hit.

An “exposure index” that tracks investment advisers from 200 firms overseeing more than $30 billion is at a two-year high, Bloomberg reported, citing the National Association of Active Investment Managers. Even the most bearish respondents are 50% long equities, something not seen since late 2017.

One thing to remember is that when these kinds of indicators reach new highs, professional traders often see it as a counterintuitive bearish signal. Between that and the technical factors pointing toward overvalued indices that we discussed earlier this week, it wouldn’t be too surprising to see a mild pullback in the coming weeks. Especially now that the excitement of a better than expected earnings season is over and stocks have hit new record highs.

That isn’t pre-ordained by any stretch of the imagination, however. Goldman Sachs (GS) analysts now see 6% more upside in the SPX, Bloomberg said in that same article. As we noted here yesterday, there doesn’t seem to be many other places for people on the sidelines to put their money if they want a chance of any returns at least in the short-term—not that stock ownership guarantees returns, of course. The “TINA” psychology (There Is No Alternative) might continue to reign for a while.